I was born and raised in Chicago and became a permanent citizen of Arizona twenty-eight years ago. My wife Joanne and I recently celebrated twenty-four years together. Joanne retired from the airlines having worked most of her career in customer service. My career has always centered around the technology of ground transportation vehicles from the muscle cars of the ’60-’70’s era through the alternative vehicles you read about in the latest periodicals. We are both Christian constitutional conservatives who together will always stand for the republican principles that make this country the great republic it is. 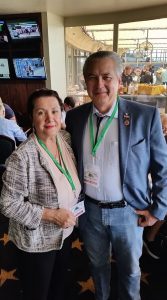 My working-class career began as a service mechanic for a forklift and construction equipment dealer in Chicago. Electronics and computer technologies were making much-needed inroads to internal combustion engines and transportation vehicles. I hired on with a vehicle test equipment manufacturer advancing with the proliferation of computer control technologies. As a certified subject matter expert, I trained service technicians for several years in the subjects of vehicle computer management systems; emission systems and their environmental impact; vehicle safety systems; electric vehicle technology; and late model vehicle diagnosis and testing. After stepping away from my training career, I have spent the most recent two years’ operating commercial motor coaches for the tourism industry while getting to know the western US meeting locals and visitors.

I became involved in the Arizona Republican Party shortly after arriving in Arizona. I always serve as a Precinct Committeeman representing registered Republican voters to the political party. I have served as Precinct Captain, Area Director, and State Delegate. I also served as past President of the Sun City West Republican Club. My Arizona legislative service includes the 54th and 55th Legislature in the House of Representatives.

I am asking for your support for a greater state of Arizona.